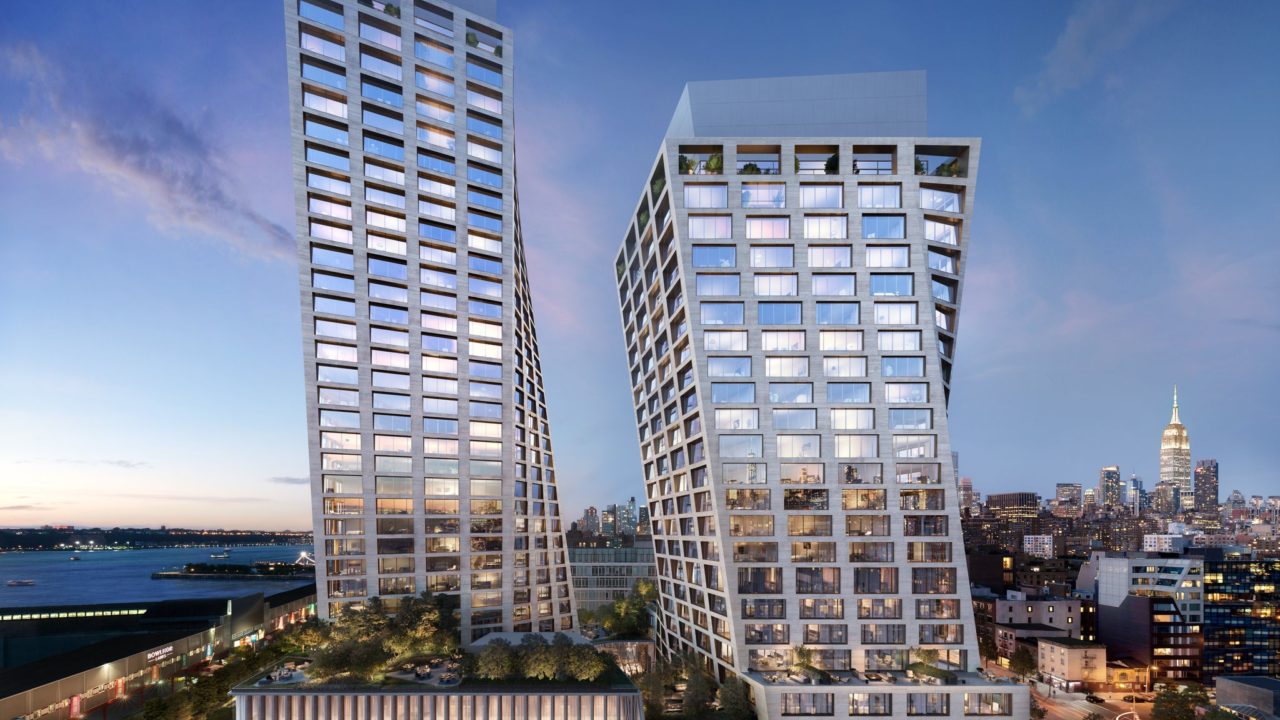 Two Twisting Towers Come to the Far West Side

Standing on the High Line last week while surveying the twisted concrete structure rising out of the ground for his latest building, The XI, the architect Bjarke Ingels said, “It’s a lot more dramatic in real life, huh?”

His client Ziel Feldman, the chairman and founder of HFZ Capital Group, said with a smile, “You’re not changing your mind, are you?”

Mr. Feldman knew it was already too late for major changes. Construction is well underway on The XI (the Eleventh), a mixed-use development at 76 11th Avenue that is transforming a full city block between 10th and 11th Avenues, and West 17th and West 18th Streets, directly south of the Frank Gehry-designed IAC Building.

With Bjarke Ingels Group, HFZ is developing a project that aims to establish its own micro neighborhood. On the large, western portion of the site, there will be two travertine-clad towers, which twist and shift proportions as they rise, along with a lower building on the southwest corner connected by an enclosed glass bridge.

The lower building will serve as a yet-to-be-determined art space and Six Senses spa and club facilities. At the center will be a porte-cochere and courtyard with plantings, designed by the Swiss landscape architect Enzo Enea.

Underneath the High Line, Mr. Ingels is planning pavilions with restaurants and retail stores, leading to a park on the eastern edge of the site designed by Field Operations and Diller Scofidio + Renfro, which HFZ is developing with Friends of the High Line as a street-level extension of the popular elevated walkway.

“Our whole idea is to create a resort environment in an urban setting,” said Mr. Feldman. “We have all the natural resources — the water, the park, the High Line.”

Mr. Ingels said he designed twisted towers in order to maximize desirable views for residents inside, by allowing the buildings to peek around each other and neighboring structures.

“We minimized the width of the tower on the river, on the lower levels,” said Mr. Ingels, describing the west tower, which has a narrower base than top when seen from 11th Avenue. “But then as it rises, it expands, and at the top, it occupies the full western facade.”

The eastern tower twists in the opposite way, he added, maximizing lower-floor views east and west, to the High Line and Hudson River, but then prioritizing views north and south over the city at the top.

In the east tower, Gilles & Boissier will extend the atmosphere of the Six Senses hotel it is designing into the residential apartments. Dorothée Boissier said her firm sought to mix polished and textured finishes to play up the natural character of materials, much like Gabellini Sheppard. However, the end result has more contrast.

The Molteni kitchens have smooth lacquer doors installed near others with a pronounced, brushed wood grain, and a mix of white Calacatta Gold and black Grigio Carnico marble. Master bathrooms have herringbone floors of light Arabescato Vagli Oro marble set off by a border of dark Saint Laurent marble.

“If you have a diamond among diamonds, you don’t see it as beautiful,” said Ms. Boissier, explaining her firm’s decision to use a high-contrast material palette. “But if you have a diamond surrounded by simple rocks, you really see the diamond. We think it’s the same in design.”

The amenity package includes a 4,000-square-foot fitness center with a 75-foot-long pool, a lounge and gallery in the glass bridge, a wine tasting room, a social lounge with billiards tables, a teen room and a children’s playroom, in addition to priority access to Six Senses.

Sales are scheduled to begin on May 7, with the launch of a sales gallery with an immersive installation by the designer Es Devlin at 25 Little West 12th Street. One-bedrooms will start at $2.8 million, two-bedrooms at $3.9 million, three-bedrooms at $6.5 million, four-bedrooms at $9 million and half-floor penthouses at $25 million. The target completion date, said Mr. Feldman, is the last quarter of 2019.