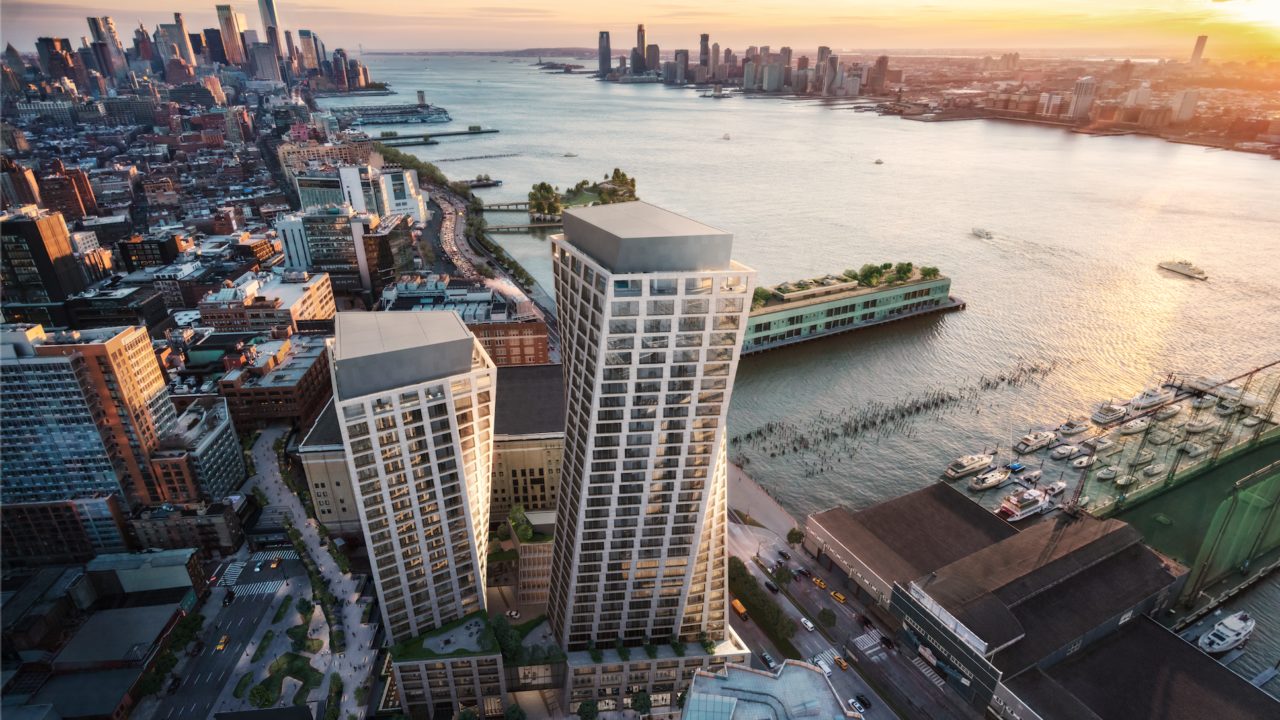 HFZ Capital Group would like to celebrate select notable highlights from 2019. Portfolio-wide HFZ achieved and exceeded many milestones and formed new and interesting partnerships along the way. We look forward to seeing what transpires in 2020.

The HFZ-Reich partnership is announced

On February 13, 2019, HFZ Capital Group announced its partnership with Reich Brothers (HFZ-Reich). Reich is a New York-based firm with more than 25 years acquiring, repurposing and remediating shuttered manufacturing sites across the United States, inclusive of the machinery and equipment. HFZ-Reich will continue to acquire additional properties throughout the US and leverage its vertical integration to serve as a one-stop solution to purchase facilities in as-is condition and repurposing industrial sites for future use and employment. Among the major assets are two significant campuses in Wisconsin, including the former 1,700,000 square foot Heinz Kraft-owned Oscar Mayer plant, located in the heart of Madison and an 800,000 square foot campus formerly occupied by Caterpillar Global Mining in Milwaukee.

On February 27th, 2019, HFZ Capital Group revealed the first look inside one of the Penthouses at 88&90 Lexington. The conversion was led by Workshop/APD, the acclaimed architecture firm. Located in 90 Lexington, the contemporary half, PHA was the first Penthouse to ever be revealed at the project. As the building’s crown jewel, PHA was added to the top of the existing building during its conversion. The sprawling 3,368 SF Penthouse encompasses three bedrooms, four-and-a-half bathrooms, a study, soaring 16-foot ceilings and floor-to-ceiling views of the Manhattan skyline, including the Empire State Building and Chrysler Building.

The XI Topping Out

On March 7, 2019, HFZ Capital Group announced that both towers that comprise The XI have topped out. The East Tower, known as No. X stands 300 feet tall and the West Tower, known as No. I stands 400 feet. Featuring architecture designed by the world renowned Bjarke Ingels, The XI is a mixed-use residential and commercial development which offers 236 luxury condominium residences, as well as the first US destination by Six Senses Hotels Resorts Spas, voted the World’s #1 Hotel Brand by Travel + Leisure.

The New York Post explores The XI’s 85,000 square feet of retail space along the High Line

On March 12, 2019, The New York Post detailed The XI’s retail space along the High Line. The XI, designed by Bjarke Ingels Group and developed by Ziel Feldman’s HFZ Capital Group, will boast not only the first US Six Senses Hotel and luxurious residential condominiums but also 85,000 square feet of retail. The Six Senses’ food and beverage outlets, along with its spa and wellness facilities, will be spread throughout 55,000 square feet of the total retail. An additional 30,000 square feet of interspersed retail spaces under and around the High Line will be curated and leased by Beth Rosen, who’s leading a Ripco team. These ground-floor and second-floor spaces along West 17th Street all have 12-foot-high ceilings on both levels and run the length of 11th Avenue before wrapping the corner into West 18th Street. Restaurants, fashion and lifestyle brands, along with art galleries, are all being targeted by Ripco.

The Bryant as “the most desirable real estate in New York”

On March 26, 2092, The Commercial Observer surveyed the transformation of Bryant Park into one of the most desirable areas to purchase in real estate in all of New York. The central location and myriad transportation options make it an ideal location for businesses, and numerous prime office spaces have been built, including architecturally-significant office towers like COOKFOX’s Bank of America building. Major retailers, like Whole Foods and Equinox, bring luxury residential amenities to the neighborhood, and residents are only a step away from Fifth Avenue shopping and the city’s best entertainment on Broadway. HFZ Capital Group’s The Bryant, built on the last undeveloped parcel of land on Bryant Park, contributes a luxury residential aspect to the neighborhood, and its success, at nearly 80% sold, is consistent with the success of the neighborhood.

To coincide with NYCxDesign in May, The Bryant launched an unconventional and shoppable model residence to showcase the unique collaboration between art and real estate. Curated by Standard Arts with furniture and objects sourced from Objects of Common Interest, artworks were selected from a series of contemporary New York-based artists with international backgrounds, including Anne Deleporte, Ana Lucia Cano, G.T. Pellizzi, Gustavo Prado, and Sei Smith. With colorful pieces framing the beautiful views over Bryant Park, the apartment was widely covered in the press, including on Dezeen and Elle Decor Spain.

On July 8th, 2019, Architectural Digest Pro interviewed architect and designer Thomas Juul-Hansen regarding his work on HFZ Capital Group’s project, 11 Beach. Thomas Juul-Hansen transformed the former art school in the heart of Tribeca into a 27-unit luxury residential building. The design being fairly modern and clean, was a result of the team relying on natural materials to have a humanizing effect on the space. The scale of these apartments were undeniably large which allowed for big kitchens, closets and ample storage space. Additionally, three pool townhome residences each have 50-foot lap pools, with an adjacent steam and sauna room.

The Belnord, The Chatsworth and The Astor featured on the cover of the NY Post real estate section July 24

In some of the most iconic buildings on the Upper West Side, HFZ Capital Group showcases its experience in restoring landmark residential addresses while adding in modern conveniences and amenities. The Belnord, built in 1908, is a full block Gilded Age residential apartment house with a 22,000 square foot courtyard accessed through an arched, gated entryway, which is just one of the many attributes beloved by the future residents of the building featured in the article. The interiors, re-envisioned by Robert A.M. Stern at The Belnord and Pembrooke & Ives at The Chatsworth and The Astor, take inspiration from the historic wood paneling and plaster moldings, while adding in top-of-the-line appliances and finishes.

On August 9, 2019, The Belnord was featured in a roundup of historic buildings that are now 5-Star New York Residences. The Belnord is an iconic Upper West Side landmark that occupies an entire city block. Robert A.M. Stern Architects, the world-renowned architecture firm is overseeing the restoration of the original architecture and re-imagining the interiors for the residences. The Belnord is one of the greatest turn-of-the-century residential buildings in New York City. The article mentions the property’s new design, which will feature 95 residences, ranging from two- to five-bedrooms, situated across 14 floors, including an additional 9,000 square feet of state-of-the-art amenities that will be incorporated into the building. Additionally many of The Belnord’s hallmarks — including the courtyard and the exterior architecture are being restored to their original grandeur and updated.

Reveal of the Pierre Yovanovitch Penthouses at The XI

On October 4, 2019, HFZ Capital Group unveiled The XI’s West Tower Penthouses, envisioned by renowned French interior architect Pierre Yovanovitch. In line with the visionary spirit that gave rise to The XI, for the first time ever, Pierre Yovanovitch brings his artistry to residential condominiums. The result is nine unprecedented Penthouses, each a singular work of art. Crowning the tallest tower in West Chelsea at nearly 400 feet, the Penthouses on levels 32 to 36 offer stunning 360-degree views of manhattan. In September, Yovanovitch released his first book in partnership with Rizzoli entitled, Pierre Yovanovitch: Interior Architecture, which showcases a wide selection of Yovanovitch’s projects, including residences in New York, Paris, London, Tel Aviv, the Swiss Alps and more. Further cementing Yovanovitch’s role as a leading visionary in the global design community, the debut of XI’s West Tower Penthouses preceded the launch of his furniture exhibition at R & Company gallery in New York City entitled “Love.”

On November 6th, 2019, Pierre Yovanovitch debuted his latest exhibition, a brand new collection of furniture, entitled LOVE. The collection was on view from November 6, 2019 - January 4, 2020, at R & Company’s 64 White Street location. Yovanovitch transformed the gallery space into an immersive exhibition showcasing over twenty new furniture and lighting works created exclusively for the occasion. The exhibition explored variations on the theme of love, featuring a series of scenes in rich colors, textured materials, playful graphic design signage elements, soft lighting, and staged with Yovanovitch’s new collection. Building off of Yovanovitch’s love of storytelling, the exhibition led guests through an unfolding narrative centered around an imaginary recurring character in the designer’s work called Miss Oops. Pierre Yovanovitch’s next major unveiling is his furniture collection inspired by The XI.

On December 20th, 2019 HFZ Capital Group announced the sale of the largest and most expensive Penthouse at 88&90 Lex, a distinctive development that represents the union of two buildings- one an art deco classic, and the other a sleek and modern tower- combined into a single living experience in Manhattan’s NoMad neighborhood. The 3,368-square-foot, four-bedroom Penthouse residence, dubbed Penthouse A, was listed at $11 million. The buyer intends to use the Penthouse as a primary residence in New York, a source familiar with the deal told Mansion Global.